Rotary members are formally grouped according to their interests and hobbies in Rotary Fellowships. Historically, the first Fellowship Our district is Czech and Slovak Rotary Fleet (fleet). It is a real association of sailors – Rotarians founded by the rules RI, respectively. International Yachting Fellowship of Rotarians (IYFR).
14 to 16 10th 2016, the fleet of sailors met – of Rotarians and their friends in a hotel in Slovak Paradise. In the evenings besedovali about past voyages future activities, we listened to stories and watched movies Richard unique Konkolského. Favorable weather Saturday all went up on ladders and Ferat beautiful Slovak Paradise. Many thanks for the perfect organization of the meeting include the Commodore of John Babic and his friends.
The main outcomes of the meeting:
• 7th Annual Rotary Sailing Week will be the 27th 5-3 6th 2017 in the central Adriatic. On Tuesday, 30. 5. 2017, all the crew meet in Zadar. The main goal is to establish personal contacts with Croatian Rotarians – yachtsmen. Thursday, 1. 6. 2017, everyone will see again in the wire where together we will discuss the activities of the fleet.
• The primary means of communication for members of the fleet becomes www.rotarysail.eu. There can be traced to what we did, what we intend, contacts and other information needed.
Yachting fans among Rotarians – do not hesitate and join us! Let us know directly of John Babic (babic@adrian.sk) or Martin Pešat (martin.pesat@hertin.cz) or Honzovi chalupa (jan.chalupa@isail.cz).

I was at the opening of the exhibition Richard Konkolski in the Komorni Lhotka on which we invite you in a recent post and I want to share with you my impressions.
But first let’s look at a few photos that I have included into photoalbum on the web. Because as we know, “To see once is better than to hear a hundred times.”

As you can see, it was CROWDED. I met some old friends – yachtsmen from northern Moravia, Jarda Korytář, Maruška Šupová and must not forget our Fleet Vice Commodore Martin Pešat. When looking at Richard, Richard’s photos and many other showpieces, such as torn Czechoslovak flag to circumnavigate the globe around, admiral anchor or the original genoa from NIKE I … I’ve remembered the time when I, too, at the NIKE plowing waters of the Adriatic. It was in 1989, still on the so-called  “foreign currency promise” and then in 1990, it already after the Velvet Revolution, when till that time forbiden world, seas and oceans opened the czechoslovak sailors. Yes it was a beautiful time, because we were young and not consumable.
But more about that some other time I write on our website www.rotarysail.eu.
Jan Chalupa

Dear friends, sailors!
In agreement with Richard Konkolským invite you to the exhibition “Exploring both above and below the surface of the seas and oceans”. The exhibition starts on 28 10th at 13 pm. At the Chamber Lhotka in the local community center.
Good luck Martin 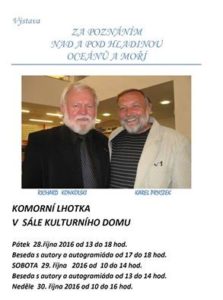