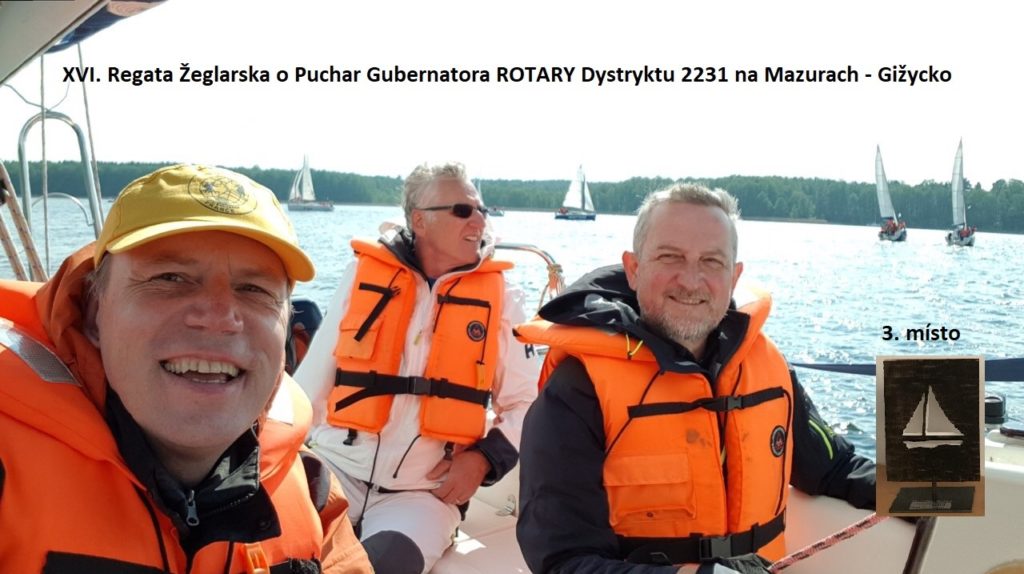 On the 17th – 20th May 2018, we participated in the regatta on the Mazury Lakes in northeastern Poland. The crew that represented our Czech and Slovak Rotary Fleet were:

Bob Křempek – Captain, an expert on the Mazury Lakes, treasurer and secretary of our fleet … and he also held a cashier on the ship, the speaker – his Polish is almost perfect – RC Opava

Honza Chalupa – skipper, trimer and tactician – he raced on sailboats during his youth, which was good – RC Ostrava

Lukáš Ženatý – an indispensable crew member, as he says: “we would not go without me” – also RC Ostrava

It raced for 2 full days in rainy but also sunny sailing weather. The wind blew persistently strong. One crew has even overtaken Maxus 24, which is hardly visible. We were successful. First day of placement: 4, 4, 8. We have improved the second day: 3,3,2,6. Eventually, it was 3rd in the Maxus 24 category in which 11 ships competed. Since we participated in this regatta for the first time, and our rivals were experienced sailors from Poland and Lithuania, it was a great success and also a big surprise. Not only for them, but also for us :-).

Finally, the perfect organization of the whole regatta must be highlighted not only in terms of sport but also in terms of social. This was already the 16th regatta anniversary . The organizers were the Rotary Club of Gizycko and the IYFR Fleet Gizycko under the auspices of the Governor of the Rotary District 2231 – Jerzy Marian Korczynski.

For us, the organizers are very grateful. We left with conviction and promise to return next year. It’s worth it.